For Poetry Monday, I decided to add a picture and large print to a poem posted 12/13/09, stemming from one of many myths about King Midas. The myth, in brief: Apollo had a dispute with Midas and punished him with donkey ears. Midas was understandably embarrassed and hid them under a turban.  His barber knew the secret but it burdened him, so he went to a meadow, dug a hole, whispered the story into it, then back-filled --hoping to be rid of it.  Reeds grew in the meadow, and began whispering "King Midas has ass-ears."  Wind carried the news everywhere. 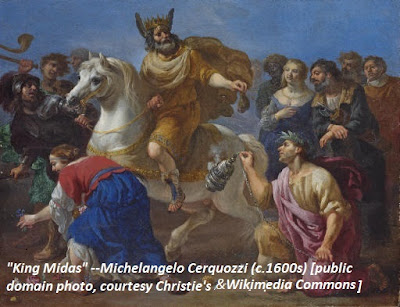 I am amazed at
What things mean.
Devices, by which
The impossible is
Seen, surround the soul.
What is secret when
Wind and rattling reeds
Repeat what is
Whispered in a hole?
Posted by Geo. at 2:54 PM